I’ve noticed from a few videos that airlines such as southwest just seem to get a flight attendant to say the safety announcement to the passengers through the PA. Is this still the case?

All budget airlines I’ve flown on have a safety announcement where the flight attendants just press a button on the FAP (flight attendant panel) or CIDS on an airbus and the message plays.

Oh yes, Cebu Pacific says all their safety announcements over their PAs

Pls, I saw this topic and said why is staff announcement showing to me

because the original poster, @Ondrej is pretending to be staff

Depends on the airline. Southwest is huge on friendly service, so it makes sense that they do in-person safety announcements. American, which I usually fly, does have a prerecorded safety announcement on all flights, including American Eagle flights operated by Envoy.

Not to be a boomer, but technology has gone too far. Let the humans do the announcements. It’s more personal and pax would rather here a flight attendant giving the r safety briefing than a corporate robot ¯\_(ツ)_/¯

Yes it is but I prefer a simple annoucncemt that I know will remain the same. Basically something I am familiar with. Luckily the easyJet one is a person not a robot

I can almost recite the entire easyjet safety announcement (sad) but if it was just said it would always be different.

That’s why you fly southwest, they make it humorous

I don’t want it to be that humorous. I just want to get into the air.

This is the funniest out there in my opinion 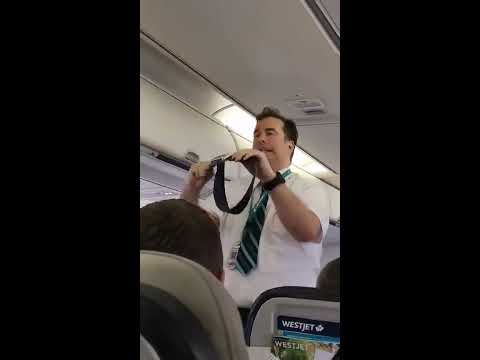 Correction. Southwest does have some recorded ones since that’s what I had when flying from MCO-AUS but it is normally a person.